While I'm waiting for my camera batteries to charge and gearing up for an evening of cooking the bounty I picked up at the farmer's market this morning, I wanted to introduce a few new tags I'll be using on the blog. I normally tag by ingredient, as well as a few other things like special blog features, and you can see all the tags on the left-hand side of your screen. I'll be cleaning the ingredient tags up a bit, but I also will be adding a few things to make the navigation more practical. These are the new tags and what they mean:

make again: recipes that I would make again, not necessarily all my favorites (those are starred in the recipe index), but the ones that I both liked and consider worth the effort required to put in regular rotation

make ahead: recipes that require advanced preparation, usually at least half a day

quick recipes: something you can put together in 15-20 minutes or less total

quick prep: might take a while, but the active cooking time is low; good recipes for folks with low energy or spoons

from the pantry: this is an existing tag, but I wanted to draw your attention to it because this is the tag where budget recipes live
Posted by Avory at 1:53 PM No comments:

How to Cook Everything Vegetarian Month One: Tomato Bulgur Pilaf with Cinnamon

I've been hesitant to start this feature while my camera battery charger is missing, but I'm hoping that doing a post without a photo will magically cause it to appear. The feature I'm referring to is something that was loosely inspired by the Julie/Julia project, a project which I admittedly had no great love for when it was happening but was inspired by nonetheless. I wanted to do something like that with a cookbook, though I didn't really want to cook an entire book, and I didn't want to cook only from that book for a year. Instead, I decided to do a monthly cooking project, and what better book for this vegetarian blog than Mark Bittman's How to Cook Everything Vegetarian?

I've broken the book down into 158 sections. I went mostly with the same level of section headers, though in some cases where a header at that level had an awful lot of content, I used the sub-headers. I left out a few of the vegetable headers that either didn't have a recipe at all or had one recipe and would be almost impossible to find in Baltimore. The goal is to expand my repertoire of simple, standard dishes, not to go wild and crazy. I'll be cooking from at least one section a month, which means that this would take thirteen years to complete if I didn't do any extras, but I will probably do extras. I won't be posting the recipes for copyright reasons, but I will include page numbers, and you can find them all in the hardcover edition of How to Cook Everything Vegetarian, available wherever books are sold.

So, month one. I started with an old favorite, bulgur. The Bulgur section is just a few recipes, but I had to go for it first because I've been eating bulgur a lot, and frankly, it's a little tired. I picked out the Tomato Bulgur Pilaf with Cinnamon on page 556, which is actually a variation on Bulgur Pilaf with Vermicelli. One of my favorite things about this book is that it's full of variations, lists, and charts to expand the main recipes. I thought the way the variation was written out could use some work, because it told you what to add but not when or how to add it. Still, I did all right. I didn't use tomato paste or garlic, and I used water instead of stock. It turned out nice and spicy and flavorful. I did think the cinnamon made the flavor quite complex, but I would dial down the red pepper flake next time because the spice overwhelmed the rest of the flavors somewhat.
Posted by Avory at 7:15 AM 1 comment:

Email ThisBlogThis!Share to TwitterShare to FacebookShare to Pinterest
Labels: bulgur, how to cook everything vegetarian, onion, tomatoes 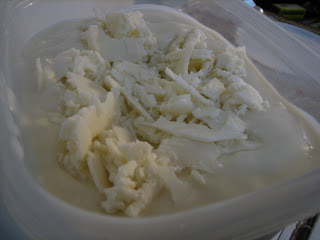 I recently received a Cuisinart Pure Indulgence 2 QT Ice Cream Maker to review from Cookware.com. Cuisinart advertises this machine as being able to make two quarts of ice cream, sorbet, or frozen yogurt, so I decided to give it a whirl on the frozen yogurt. I used a recipe for vanilla frozen yogurt from the manual that came with the machine, and I was impressed with how well it did the job. You'll notice from the picture that what you come up with is a lot of creamy frozen yogurt with some frozen shavings dumped on top. This is because the bowl freezes the ice cream through a coolant that is housed within the walls of the bowl. Thus, the metal walls are much colder than the middle. I recommend having your plastic or rubber spatula ready to go as soon as you stop the machine, because the quicker you scrape, the less you get those frozen shavings. That said, they mixed in well, and once I froze the yogurt for a couple of hours, it was a homogenous substance.

The benefits of this ice cream maker are its size and its ease of use. It's very simple and it does what it's supposed to. The 2 quart size is great because you can make enough for a party if you need to. You do have to store the bowl in the freezer, which means you need room for it, but you can use the base on your counter and it only takes 20-30 minutes to make dessert. The frozen yogurt I made was smooth and creamy, though I thought the recipe in the manual was a little bit too sweet. It also doesn't freeze well for the long term; if you're the only one eating you probably want to make ice cream instead. You can get your own ice cream maker at Cookware.com. I also noticed when I was browsing the site that they have a ton of decently priced bakeware, so you might want to check that out as well.

Disclaimer: Cookware.com provided an ice cream maker for review free of charge. Shortcut to Mushrooms reviews books and products as provided only when given complete freedom to write an honest review. No direction was provided in writing this post.
Posted by Avory at 9:18 PM No comments: