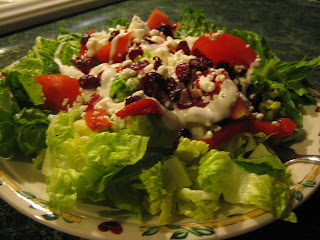 And now, back to your regularly scheduled programming! I've moved from Iowa City to Baltimore and am all settled in, so I thought I'd pop in and tell you about a few things I've been eating and drinking lately. This first photo is of a lovely salad that my friend Cass made me on a stopover in Pittsburgh Wednesday night. It was fabulous to have some nice fresh veggies for dinner after eating energy bars all day on the drive. Here we have lettuce, tomato, dried cranberries, roasted red peppers, and ranch. Yum! 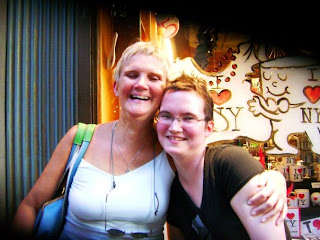 I arrived in Baltimore on Thursday, but immediately disappeared again for a weekend in New York. After another day of energy bars, I had a great dinner at John's Pizzeria in midtown Manhattan with Rita, my Aunt Judith (pictured here with me), and her partner David. I went to John's once several years ago, and though the pizza wasn't exactly what I remembered, it was still very good. Rita and I split a spinach salad and a bruschetta pizza. I like the lack of tomato sauce, and the ingredients were definitely high quality. 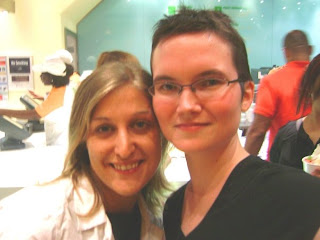 After we said goodbye to Judith and David, Rita and I headed to the nearest Pinkberry for frozen yoghurt. Apparently, yoghurt is a big deal in New York this summer. There have to be at least ten chains, some national and some just local. I had meant to go to Pinkberry in LA but was too full, so it was fun to try it here. This photo is Rita and I at the Pinkberry, and below you see our cups (we were too eager to take a picture of the actual yoghurt!) I had coconut yoghurt with cherries and strawberries, which was good but maybe not as fabulous as all the bloggers had led me to believe. 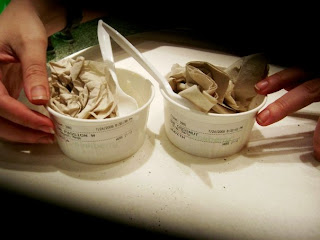 We also went to Yogurt Station on Saturday evening, after the many food adventures described below. I liked it a lot better. There were more choices of flavors, the yoghurt was really good, and you get to choose what you want. You pay 35 cents an ounce and can get whatever you want - a little, a lot, multiple flavors, toppings or none. I had coffee and cheesecake yogurt with graham cracker crumbs, resees, and heath bar crumbles. Delicious! 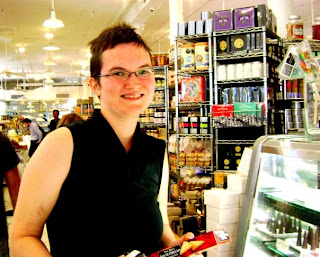 Backtracking a bit, this photo is of me in Dean & Delucas, which I couldn't pass by when we stopped downtown for sunscreen. I got a peach to eat on Brighton Beach as well as some chocolate covered brandied cherries and chocolate covered espresso beans. All good, though I was bummed that there wasn't any matcha powder. I couldn't spend too long in there or I would have gone broke, quite literally. I'd love to go sometime and just sample chocolates all day! 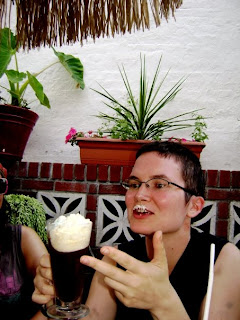 After the beach, we headed to Rita's friend's Kim's neighborhood in Brooklyn (Court Street) and decided to go to a place called Mezcals. It was a tossup between that and South Brooklyn Pizza, apparently the best pizza in New York, but I'm glad we picked what we did. The food was great, especially the guacamole taco (isn't that an awesome idea?) I had a couple of drinks called Chilam Balam that involved cream of coconut, kaluha, rum, and pineapple juice, and also tried Rita's Mexican Coffee. This is my "that's interesting" face. After dinner, we went to lower Manhattan for cocktails at Death & Company, a very cool little bar with lots of cocktail choices and a prohibition theme. I had a delicious gin cocktail called the European Union in honor of a class Rita and I took in law school. 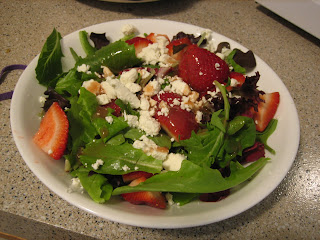 We then went to Mamoud's, an amazing falafel place where you can get falafel with baba ghanoush for $3, and Yogurt Station. Finally, there was just enough time the next morning to run to my beloved Pink Teacup for grits and biscuits to eat at the bus station. All in all, a good trip for eating! The last picture for today is of tonight's dinner, another salad made with spinach/lettuce mix, strawberries, goat cheese, and pomegranate vinaigrette. Yum!
Posted by Avory at 6:20 PM 13 comments:

Last year, I celebrated my blogaversary with a cake. This year, I'm moving in four days and the only food in my house is two pre-packaged salads, a wrapped spanikopita for the road, a rootbeer, two slices of bread, half a jar of peanut butter, a few jars of jam, and some organic cherry pops. I think I may, nonetheless, go to the co-op and get a cake slice to have with my root beer :-)

So here are some of my favourite cake recipes:

Looking forward to another, more productive year!
Posted by Avory at 1:31 PM 1 comment:

Some Good Things and an Update

I've been trying not to update without pictures, since that's what a foodblog is about, but I feel like at least letting my readers know that yes, I'm still alive, that if you still have me on your RSS feeds please don't give up on me, and to give you an idea of what's going on with me. I'm moving to Baltimore next week, at which point I'll finally get a chance to decompress and live life at a semi normal pace. It's not that I haven't had time to blog lately, but actually more that I haven't thought about it because I haven't been cooking. The combination of needing to pack up my pans and appliances and food and the fact that it's been warm enough not to want to use a stove have led me to a lot of simple things like salads. I do have a few things I'd like to recommend, though, while you wait for me to return for real:

1) Larabars. I might have just spent $77 on a very large supply of them at Amazon (so worth it).

2) Cascadian Farms jam. It's organic, and it's really, really tasty. I've tried strawberry and raspberry but I'm saving the even more appealing apricot and blueberry for later.

3) Tofurky kielbasa. It's kind of surprising, but if you fry them they're really tasty and spicy and sausage-like.

I may not be cooking much over the next few weeks, either, since I'm trying not to unpack much when I'm in a sublet for three weeks, but I am definitely excited about being back to Baltimore restaurants - Sofi's! XS! Golden West! Cazbar! Liquid Earth! - and I'll also try to get up some of the dessert recipes I made a little while back and didn't post.
Posted by Avory at 2:33 PM 1 comment: