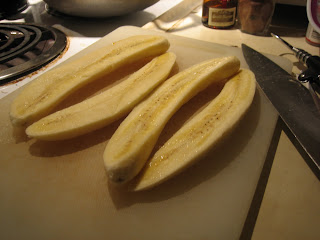 Recently, my mom celebrated her birthday and I went home to North Carolina to see my parents for the occasion. For dinner, we had Smitten Kitchen's mushrooms bourguignon, which I've blogged about previously (always choose a familiar recipe to cook after a five hour drive) but I tried something new for dessert. Daddy doesn't really like super sweet things, and I knew I wouldn't have time to bake, so I decided to go in a fruitward direction. The choice was Alton Brown's recipe for bananas foster. Alton's usually a pretty sure shot, though sometimes I can be underwhelmed by his recipes. 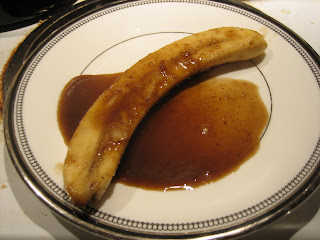 Sadly, this was one of those times. It wasn't bad, per se--you got the banana and the liqueur flavored rum sauce surrounding it--but the instructions didn't really yield a nice bubbly caramelized banana like I was picturing, and getting the thing to catch on fire was a hell of a task. Don't expect that his "get the pan really hot" trick will work. You do need flame. We got the sauce to light, but only for about 15 seconds, so it didn't really do its job. Hence the sad cold banana sitting in sauce photograph. Oh well. At least we tried!
Posted by Avory at 7:49 AM No comments: