Initially, Marx Foods approached me about participating in a Candy Cap Mushroom contest.  Through a series of unfortunate events including empty grocery shelves and the stomach flu, I was unable to meet the deadline, but I did want to review these mushrooms for you.  I ended up using them as a twist on my Thanksgiving dessert, and it worked out quite well! 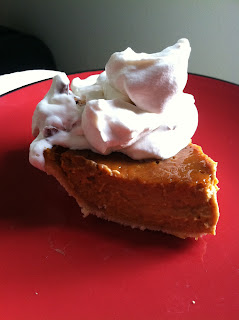 When the mushrooms arrived, I wasn't quite sure what to do with them.  Reviews described them as tasting like maple syrup and being very sweet, but the smell was more of a smoky/sweet combination, and somewhat unusual.  What would they go well with?  I ended up doing something very simple, and it worked out very well.  Since dairy takes on flavor so effectively, I let a good handful of the dried mushrooms sit in a small bowl of heavy cream overnight.  When I whipped it, I added a couple of teaspoons of maple syrup, resulting in a great smoky/sweet topping for pumpkin pie.  My take?  Surprisingly good!  I'm not sure I could find many uses for these, but as a special treat, they're a fun and unusual accent to a recipe.
Posted by Avory at 3:24 PM No comments: 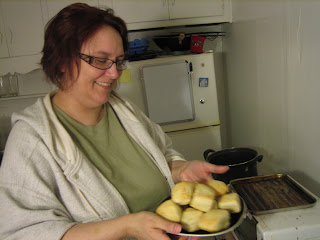 This post is about a recipe that my girlfriend Hilary and I made way back in March, and now it's just coming around to be cold enough again to make sense to post.  I know I've been lagging on this blog, but I want to continue to post the recipes I make, and hopefully will get more regular about that with time.  This particular idea was Hilary's invention, adapted from the amazing Simply Recipes recipe for Rustic Onion Tart.  Instead of using the rustic tart dough, Hilary made cream biscuits, split them for a base to cover the bottom of a loaf pan, layered the onions on top, and topped with Dubliner cheese to melt in the oven.  This was an awesome idea.  Oniony, balsamicy, buttery, cheesy, yum.  You can also slice the melty mess into individual biscuits again, wrap, freeze, and then just stick in the toaster oven one at a time for breakfast. 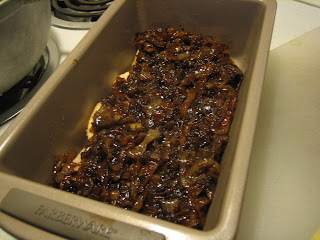 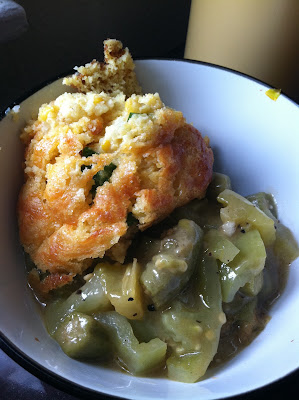 As you may have noticed, I took a break from this blog for the summer.  Unfortunately, I realized when loading it back up again that a post queued for May never appeared!  In that post, I reviewed Kelapo coconut oil.  Many apologies to the Kelapo team for not posting the review!  Instead of putting that old post up now, I decided to make a different recipe with their product.  I also wanted to bring back Farmer's Market Finds after heading to the Waverly Farmer's Market in Baltimore with my friend Hanne this Saturday and bringing home an impressive haul.  I put together a green tomato and okra stew, adapted from a Mark Bittman recipe, and realized that cornbread was the perfect accompaniment.  In comes the coconut oil! 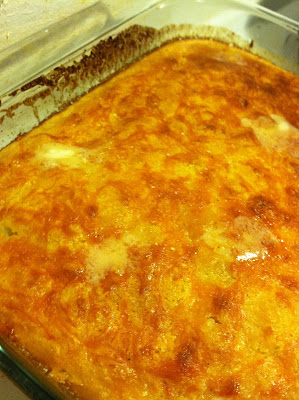 Kelapo makes a virgin coconut oil that is probably best used as a finishing oil, given the strong flavor.  However, I wanted to add a little to the sweetness of this cornbread, contrasting with the poblano pepper I picked up at the Farmer's Market and substituted in place of jalepeno in the recipe.  I used 1/3 cup coconut oil in place of the canola oil I would normally used, and I thought the coconut flavor contributed very nicely.  This is a dense, moist cornbread, sweet and spicy and perfect with butter melted on top.  (I used South Mountain Creamery butter from the Farmer's Market).  Next time I try this recipe with coconut oil, I'll probably cut the sugar down.

Preheat the oven to 400 and spray an 11 x 15 baking pan with oil.  Sift or stir together the first six ingredients.  Whisk eggs well, then whisk in milk, oil, and garlic.  Combine wet and dry with a few swift strokes, then add onion, corn, peppers, and half the cheese.  Pour into pan and sprinkle with remaining cheese.  Bake 30-35 minutes or until golden brown.  Dot with butter and sprinkle with salt. 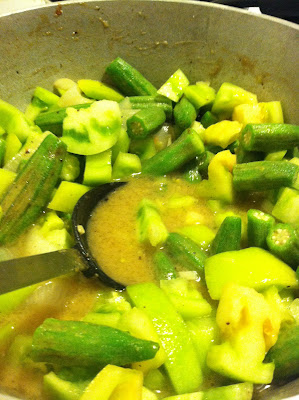 I got some really awesome okra, as well as a box of green tomatoes, at the Farmer's Market.  I love okra, but I'm not a big fan of the whole drench-and-dredge fry preparation.  Instead, I went hunting through my vegetarian bible for something else to do with the okra and found Mark Bittman's recipe for okra stew with tomatoes.  The green tomatoes were perfect for this.  It's kind of a Southern taste explosion.

Put 2 T oil in a deep skillet or large pot (I used my Dutch oven) over medium-high heat.  Add onion, sprinkle with salt and pepper, and cook, stirring frequently, 2-3 minutes or until soft and turning golden.  Remove with slotted spoon.  Add remaining oil to the pot and turn heat down to medium low.  (My stove is a bit wimpy and I actually ended up having to up the heat again at the end because my roux wasn't getting much darker).  Add flour and cook, stirring almost constantly, until the roux becomes tea-colored and fragrant.  This is supposed to take up to 10 minutes and you should lower the heat if it's sticking.  I had to up the heat and it got darker but never tea colored.  When I added the okra though, the oil splattered and it got dark fast.  Add the okra and stir 3-5 minutes or until the okra starts to soften. Add the garlic and cook a minute or so, stirring once or twice.  Add onion and tomato, plus a cup of water (maybe a little more if you're using green tomatoes).  Sprinkle with salt and pepper.  Bring to boil, then bubble gently, stirring occasionally, about 45 minutes or until okra is very tender and sauce is thick.  Add oregano if you like and garnish with parsley. 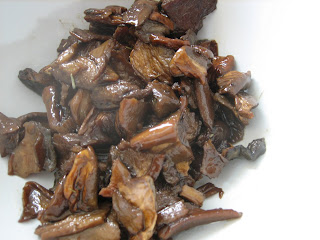 As I'm sure will be no surprise to any regular readers of this blog, when I have a chance to sample a mushroom product, I always take it! I recently had a chance to try FungusAmongUs dried porcini, chanterelles, and porcini salt, and used them to create the recipes below. If you're interested in FungusAmongUs, you can visit the FungusAmongUs website or take advantage of a Facebook deal they're running now for $10 truffle products. Or, stay tuned for a giveaway coming up on the blog where you can win a FungusAmongUs sample! Disclaimer: The products reviewed on this post were provided free of charge by FungusAmongUs. No other financial ties exist between the blogger and FungusAmongUs. 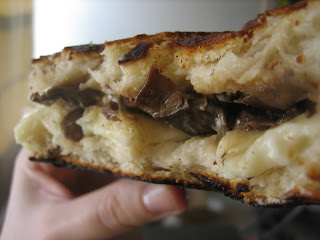 I've been wanting to get my hands on some dried porcini mushrooms for ages, so I was thrilled to try this jazzed-up grilled cheese with porcini and Swiss. You could do this with a fancier cheese, too. I simmered the dried porcini in water first, then added some Cabernet once the water cooked off. Next, I tossed in some olive oil and dried herbs, along with a pinch of the FungusAmongUs porcini salt. After cleaning out the skillet, I assembled the sandwich on cibatta, using a portion of the mushroom filling, plus a spread of mayo and the cheese. I generously buttered the outside of the sandwich to grill, getting a good dark crisp on the outside. The mushrooms had a nice dark, earthy flavor, a good compliment to the mild cheese. 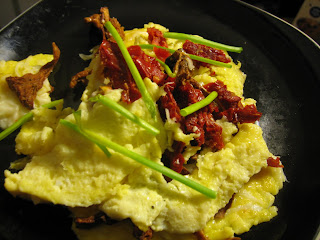 This was a somewhat less successful experiment, though I do know the reason. I reconstituted the chanterelles in hot water, but didn't cook them before adding them to the cooking eggs in the pan. The best thing to do would be to chop them up very small and sautee, then toss in the omelet with the cheese and tomatoes. The texture of the chanterelles is less appealing to me than the porcini, though I think they'd be a good addition to a soup or stew. 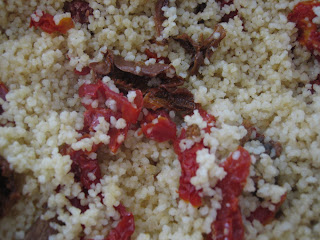 With the leftovers from the omelet, I made a somewhat more successful dinner. This is very simple--cook the couscous with olive oil and sea salt, then toss with sundried tomatoes, sauteed chanterelles, the olive oil from the sauteeing, and a bit more salt. 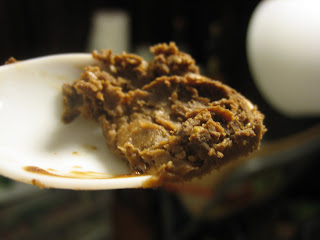 Although I don't partake in the activity for which 4/20 is famous, I feel that I oughta post a recipe for those of you who do. I also feel that I should note that if you're at all concerned about the toxins found in plastic, this recipe is not for you. For me, the risk is worth the bliss of a one-dish easy dessert that can be made from what I have lying around the apartment. 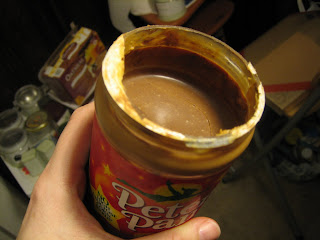 This was something of an experiment, so I figured it out in steps. Basically, you want to take a peanut butter jar that's about a third full and dump a couple of tablespoons of powdered sugar in the jar. Use a mug to microwave about a half a stick of butter, add to the peanut butter, and stir until the mixture is smooth. While you're stirring, microwave an almost full mug of chocolate chips and then stir the melted chocolate in. I originally did a little too much butter and not enough chocolate, but I think this is about right. When it's smooth, put the lid back on and chill overnight. You'll have delicious fudge in the morning, or for a holiday-appropriate late night snack.
Posted by Avory at 7:05 PM 1 comment:

Email ThisBlogThis!Share to TwitterShare to FacebookShare to Pinterest
Labels: candy 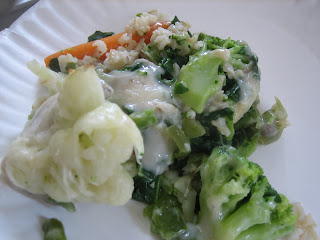 This is a thrown-together, easy and healthy casserole that anyone can throw together on a weeknight using simple ingredients that anyone has around the kitchen. Start with a layer of brown rice, then add a few bags of frozen vegetables. I used a bag of mixed veggies, a bag of collards, and a small bag of green peppers. You don't even have to thaw, because nothing will burn in this. Dump in a can of cream of mushroom soup, add a cup of shredded low-fat mozzarella or cheese of your choice, and put the dish in the oven at 350 until hot, bubbling, and the cheese is melted.
Posted by Avory at 7:37 PM No comments:

Email ThisBlogThis!Share to TwitterShare to FacebookShare to Pinterest
Labels: casseroles, from the pantry 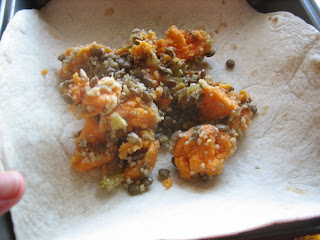 I keep seeing recipes around for sweet potato enchiladas and burritos, and it had given me a craving a couple of weeks ago. My initial plan was to stick pretty much with a recipe from Budget Bytes, but after I got the sweet potatoes I realized that I didn't have any soy chorizo. So instead, I decided to improvise a little bit and instead of chorizo and poblano I used some couscous and lentils I had left over, mixed with canned green chilis. It was a little odd, but I think it turned out really well once the whole thing was smothered with requisite sauce and cheese. I used burrito sized tortillas, three to an 8 x 8 pan, and rolled them in advance so when I got home all I had to do was add the sauce and cheese and pop the whole thing in the oven. 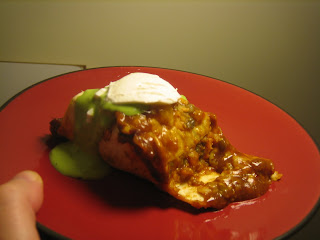