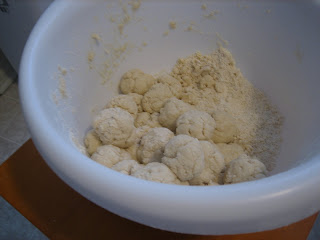 I wanted to participate in this month's doughnut event since I saw it on Peabody's blog, but I had a little trepidation. I love the taste of deep fried food but I hate the cleanup. Still, I decided to bite the bullet and attempt it, and the result was pretty tasty, though my cleanup fears were not unfounded. There are a few doughnut recipes I'd been curious to try, but I ended up going with this recipe for Kala Jamun, which substitutes pancake mix (!!) for the traditional Indian ingredients. 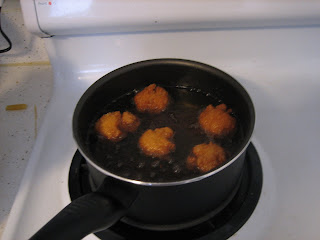 I mixed the dough with my fingers, and had a lot of trouble because my hands kept getting sticky, even with flour, so it maybe wasn't quite as even as it could be. Even so, I managed to roll it into neat little balls with just some leftover that wouldn't quite incorporate. I tried the first batch and then realised wow, these things expand! Pretty soon I had a pan full of uniform floating dough. That wouldn't do, so I dumped it and tore all my remaining balls in half. 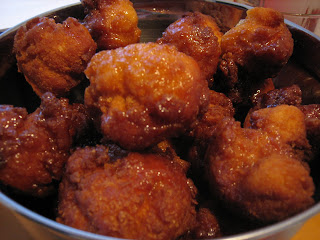 That worked pretty well, though they do cook rather slowly. My main difficulty was in getting them to turn over, which really needs to happen halfway through or part will stick out of the oil and not get brown. I assume that if my balls were more uniform, this would be easier, but as it was I had a lot of trouble. It took about eight minutes a batch, and after I cooked half I gave up and threw out the other half of the dough. 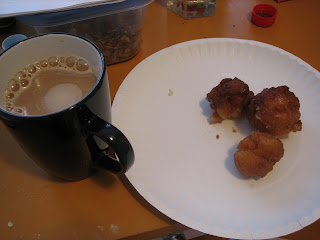 The syrup was also a little troublesome - next time I would use a much shallower bowl so I could simply roll the doughnuts in the syrup and encourage them to absorb it. I will note that those closer to golden than to brown absorbed a lot more syrup and had a great fluffy consistency inside. Perfect served warm with a tasty cup of Oregon brand chai lattee, as seen here. If I do this again, I'll be cooking them only until just golden brown. Still, even with my difficulties they were tasty, and if I ever live in a flat with a dishwasher, I'll probably try it again.
Posted by Avory at 4:45 PM

I saw your blog on the "Adopt a blog" feature and just want to say that your recipes look great. I think your pictures are pretty nice too.

I have a few ideas about presentation, though I'm no expert myself. But if you're interested why don't you drop over to my blog and leave a comment, and we can chat a bit if you like.

In any case, keep up the good work.
Cheers!

I will never look at pancake mix the same.
Thanks for participating.