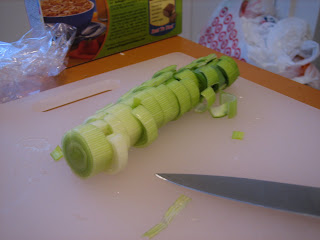 This post is brought to you by a combination of events, each of which I will briefly try to describe for you. First, there was the blogging event I read about earlier in the month for which foodbloggers are encouraged to make something with leek to celebrate St. David's Day. My (very English, really) close friend Kate is very proud of her Welsh heritage, and I really like leek, so for some reason those two things came together to convince me to participate. I planned to make a leek dish this weekend, but unfortunately, by the time Thursday rolled around I realised I just wasn't going to make it to the grocery store for my leeks. 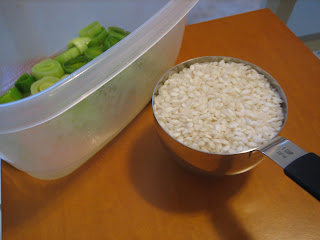 But then Thursday afternoon I went to the library to check out Claudia Roden's New Book of Middle Eastern Food and May Bsisu's Arab Table and I discovered that someone had plopped a brand new grocery store in the middle of the Ped Mall when I wasn't looking! The Bread Garden Market and Cafe is very much like the Fresh Market in my hometown: attractively lit, rather expensive, and always tempting. I noticed their produce is a lot spiffier looking than some of New Pi's, and I like the little cafe and the salad bar (though my wallet approves of neither). Also they're in a better location, which is a big plus for me. In the library, I got out my computer and decided to find a leek recipe after all. I settled on something called "Saintly Mushroom Risotto" that I'd copied down from a vegan recipe community, which is not only vegan and features leek but is made in the microwave. 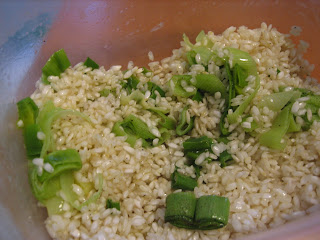 Okay, so I was sceptical. Who wouldn't be? But especially after reading Ruth Reichl's Garlic and Sapphires this week, in which she waxes poetic about several risottos and is very insistent on how difficult it is to get that creamy texture but retain the proper bite, I didn't really believe that a microwave recipe would work. Still, the book had given me a risotto craving, as it's one of the few meat-free things she talks about, and I didn't feel like making "real" risotto. I went back to the new store and picked up a bag of Arborio rice, a leek, and a pack of shitake mushrooms. I realised that there wasn't really enough leek in the recipe to justify submitting it to the leek event, though. Then I remembered that I wanted to enter the Novel Food event, and thought this might qualify. And finally, I wanted to start the new "Foodie Bookshelf" feature here with a book review. So here I am. 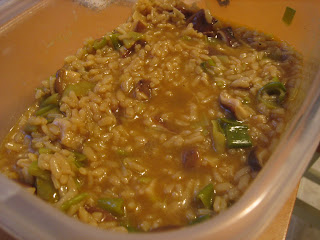 First, the book. As always, I loved Reichl's writing. She has not only a passion for food that really resonates with me, but also a gift for telling a good story, and there were plenty of stories to tell. In Garlic and Sapphires, she highlights some of the experiences she had as the New York Times food critic, many of these in disguise. Along with all the food, she manages to sneak in a healthy dose of compelling memoir and also some observations about what it's like to find different women inside yourself. Interestingly enough, I wasn't so hot on the writing in the reviews themselves, some of which she includes. She does have a tendency to use extended metaphors and cliches that get a little old, and I prefer her straight descriptions of the food itself to hearing about how it transported her to a French country villa, etc., etc. Also, almost all the recipes are meaty, or at least have some meat element. That said, I highly recommend for a quick, funny, food filled read. I even got inspired by the stars to do something I've been meaning to for a while. At the bottom of each recipe post from now on, you'll see "The Bottom Line." Recipes will get one to four stars for taste, appearance, and ease of preparation, and one to four dollar signs for cost. I may go back and add this to older recipes as I have time. 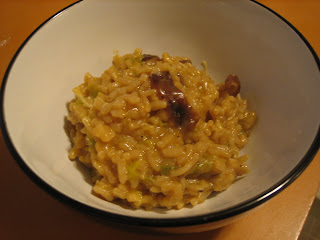 Now, onto the risotto. I modified the recipe a bit so I'll post it here anew. First I washed and chopped my leek into rounds. I was a little suspicious of how clean this particular leek is, but maybe I'm just being silly. I put it in my nice big Tupperware container with a healthy splash of olive oil and tossed to coat, then microwaved for two minutes. Next, in went a cup of Arborio rice (the Italian short grain rice used for risotto) and a dash of salt and pepper. Tossed it around a bit, back in the microwave for two minutes. Next, three cups of veggie stock, a good stir, and two sheets of plastic wrap over top. Don't forget to slit to let steam escape! Microwave another eight minutes. While that was going, I took the stems off about six shitake mushrooms, rinsed them thoroughly, and chopped into good-sized chunks. They went into the Tupperware next, and the wrap went back on. Now here's where I'd do it a little differently next time. I think it would have been smarter to leave the wrap off and do the next five minutes without it in order to let some of the liquid cook off. Instead, I put it in five minutes, realised it was more like risotto soup, and had to zap it a total of four minutes without the wrap to cook the liquid off. The risotto was creamy but had definitely lost its "bite" at this stage, and the mushrooms were very soft.

That said, I found this to be a very tasty dish! I let it sit a little while after it was done to thicken, and it reached a very nice consistency. Also, I added salt and pepper at the end and followed my "this recipe would be vegan if I hadn't dumped a pile of cheese on top of it" tradition by blending in about half a cup of Parmesan. That improved the taste exponentially, and where at first I was sceptical I definitely think I'd try this again when in the mood for risotto and pressed for time. Might just use regular onions and mushrooms, though.

Taste: ***
Appearance: ***
Ease: ***
Cost: $$ (The ingredients were expensive individually, but I had leftover rice and mushrooms and this made about four to six servings with a veggie on the side)
Overall: ***
Posted by Avory at 8:05 PM

Are you familiar with the easy, reliable, time and taste tested, nutritionist approved (and developed), 1300 vegetarian recipes in “American Wholefoods Cuisine.” In print for more than thirty years it is considered the “vegetarian Joy of Cooking” by both gourmet and health writers. For more info go to HealthyHighways.com

Thank you so much for the package of goodies. I appreciate all the items, but love the recipes most. I hope you get yours soon - it really is fun.

Thanks for taking part in our Novel Food event! I saw your comment on my blog, saying you hadn't heard back from us -- but your comment was the first I'd heard of your entry. Could you send me an email with the permalink and Novel Food in the subject line? I want to make sure we get it in the roundup!

The risotto looks great -- and I, too, love Reichl's books, all three memoirs.

I just made some leek risotto using the traditional cooking method: I was very intrigued by the microwave method and your analysis of it. I am glad you liked the final result. I only read Reichl's first memoir and enjoyed it. Thanks for participating in our event!

Hi again Judith, got your message. You were included in Simona's part of the round-up, so it all turned out all right (we split the submissions, since we cohost the event). Some of the submission emails were put in my SPAM folder by Gmail, grrr, so I'm on the lookout for those now! Thanks again for your great entry.

I really enjoyed this book, and now I want to read her others. My hubby made the risotto primavera recipe she included in G&S, which was pretty good, and asparagus has been on sale lately!