Healthy Eating: It's Good For You! 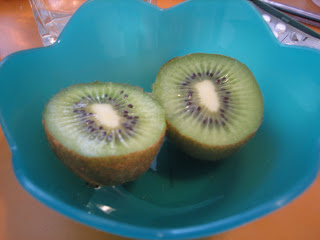 I find that one of the challenges of living alone and doing all my own cooking is that I'm not nearly as good at balancing meals as, say, my father is. I also seem to be living under a delusion that fresh produce is still as expensive as it was when I lived in Ireland (which was the first time I did all the shopping and cooking for myself). I developed a no-produce habit then, and I'm afraid it's stuck with me. This week, however, I broke out of the mould, and I really felt much better. As you can see, I took advantage of the the 59-cent kiwis, and also picked up a two-pound spaghetti squash for $1.13... and ate all of it in one sitting. 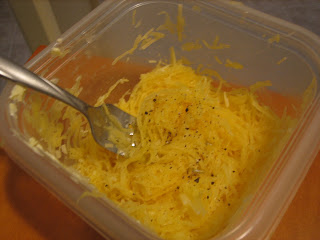 Mm, squash. Roast it halved for 40 minutes to an hour at 350, preferably with an inch of water (I didn't bother, so it was sort of crunchy-tender), scrape all those delicious squash strings out into a bowl with your fork, and toss with butter, Parmesan, and freshly ground pepper. If you want to be fancy, serve it out of the hollowed-out squash shell. If you don't give a damn, eat out of a Tupperware container. Yum! 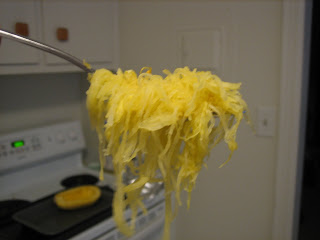 It's funny - after years and years of seeing myself as a slightly overweight person, no matter how much weight I lost, I've realised that I finally see myself as a skinny person. Thing is, I'm gaining weight every day, and though I don't really care about the weight itself, I realise that not caring about my weight means that I'm not doing great on nutrition, either. That's no good! So I've decided to make a deal with myself. No buying ice cream (aka; ration the twelve tubs that are in my freezer, and that's not an exaggeration), coffee, snacks at the convenience store near work, candy bars, any kind of candy really, or anything from any university "canteen." This is as much about saving money as being healthy, really. 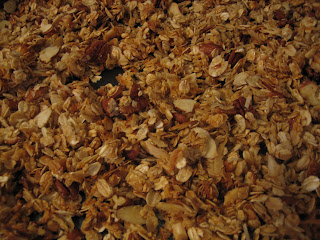 The plan then is to cut back on snacks as much as humanly possible, and slowly to phase in healthier snacks. Meals? Large! I normally eat cereal for brekkie, but cereal's not all that cheap. I made my own granola the other day, and it was so much tastier than the last batch. This time I used Orangette's chocolate granola recipe here, but I made a lot of modifications. Most obviously, I left out the chocolate. I used the Airborne New Zealand clover honey that cost $9 at Prairie Table but is amazing and just makes the granola, natural cane sugar, sea salt, sweetened flake coconut, and a mixture of sliced almonds, slivered almonds, and pecans for the nuts. I was really pleased to find that if you don't stir when you remove from the oven, it sticks together really well - then you just break it with your hands to form clumps. 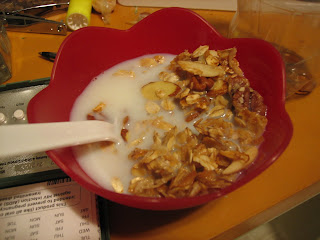 Anyway, I think I'm going to start making homemade granola in big batches (even though it isn't actually cheaper than cereal, I already have the ingredients and only have to keep replenishing the oats). Along with that, though, I'm going to try to eat yoghurt and fresh fruit. I'm going to take full advantage of the Farmer's Market this year, and eat lunch at home wherever possible so that I can have a large lunch and decent-sized dinner. Since I should only be doing one class at a time during the summer (and working a lot), eating at home should be plausible. In fact, I've found myself consciously trying to make my fall course schedule such that I can eat all meals at home, too. Mm. Wish me luck!
Posted by Avory at 8:47 PM

Good for you! You sometimes have to stop and think about what you are eating!
I haven't tried that squash before, but it looks very interesting!

Hey Judith! Thanks for your comments! After the indulgences of the winter months, we also have to watch our intakes, especially the ice cream!! I am sure you will do a fantastic job at it, starting with the granola!!
I'll check back to see how you do!
Take care.

It all looks so good, I'm torn as to whether I'd rather have the kiwi or the squash. I have a kiwi sitting on my counter at home, thanks for reminding me!

thanks for stopping by my blog fellow iowan! i'm actually really from virginia, so that's even closer! i understand your thoughts and feelings about weight completely and hope you are able to find a balance that is right for you...i'll be popping in more often now!

Tartelette - Too true. Thanks for stopping by!

Jennifer - Hehe, no problem! I always forget about my produce lying around.

Mary- Great! I did notice that you're from VA and went to school in TN, so right around my neck of the woods. I went to school in MD, but I thought I'd try something new (and Midwestern) for law school. I like it so far!