A Cinnamon Celebration with Dim and the Dark Cookies 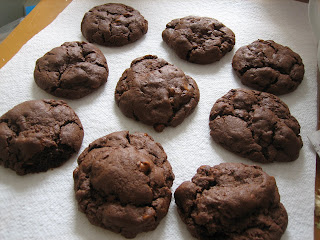 This recipe has been on my to-do list for at least two or three years. The lovely Miss Shelley Adams of Richmond, Virginia created the recipe in honor of the band Jump, Little Children's last full album, Between the Dim and the Dark, and when I saw the awesome mélange of ingredients I knew I'd have to try it some time. A couple of the members of the band were friends of mine (and music instructors!) and though I've moved past my indie rock kid days I do miss them all. I've linked to a song I've uploaded if you'd like to hear them (a live track so I don't get in trouble). It's one of their more fun crowd-pleasers, if not the most musically challenging, featuring my friend Matt on vocals, and it's actually a track from the first concert of theirs I went to back in 2003. Also, be sure to check out the lovely blog A Southern Grace for the Cinnamon Celebration round-up. Happy V-day to you all! I'll be celebrating with a mushroom stroganoff, a glass of wine, and the film Paris Je T'aime. It should be a fun Self-Love Night.

Dim & the Dark Cookies
recipe by Shelley Adams
makes a couple dozen, give or take


Sift together a cup of flour, ½ cup plus 1 T unsweetened cocoa powder, ¼ t salt, and ¼ t baking soda into a medium bowl. Combine ½ cup sugar with ½ cup light brown sugar and mix with the fingers to press out lumps. Add 6 T slightly softened butter, ½ t ground cinnamon, a generous pinch of cayenne, and 1 t vanilla. Mix about a minute on high, then beat in an egg. Slowly add the flour mixture on low speed. Stir in ½ cup semi-sweet chocolate chunks and ½ cup cinnamon chips. Drop by tablespoons on a lightly greased cookie sheet. Bake 12-14 minutes at 350. Cool on a wire rack. Remove cookies to racks to cool.

This are super-amazingly delicious, soft and crumbly but not too cakelike for a cookie-lover like me. The cinnamon gives it a great spicy kick, and I would recommend a generous pinch of cayenne. I was kind of wimpy with it but that's not necessary.
Posted by Avory at 8:39 PM

yes indeed, chocolate and cinnamon seem to be an ideal combination! i'm personally obsessed with cinnamon chips and almost suffer a mental breakdown every time i look for them at the grocery store and they're not stocked. :)

Thanks for being my Taste and Create Partner!!! I had fun baking!