Tuesday night, I decided a celebration was in order. As I believe I've mentioned before, I started law school here in Iowa City in May, and I've been pretty bad about going out to eat with friends since then. I've found some great restaurants, and really enjoyed myself, but let's face it—food isn't free. Even cooking at home can be pretty expensive, so I needed a part-time job to help "pay myself back" for these outings. Well, folks, as of Tuesday, I have one! I'm working at Lucas On Campus, a before and after school program for kids. In honour of my hiring, and to use the martini shaker and cooking scale that arrived in the mail Tuesday morning, I decided to make a little celebratory dessert. 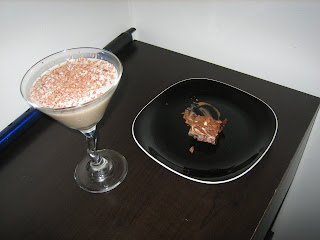 The recipe for cream cheese ricotta brownies has been making the blogging rounds as of late. I saw it on Tartelette, where it was borrowed from the amazing French dessert blog Chocolat & Caetera, who got it from one of my favourite French bloggers Loukoum at Beau à la Louche. This seemed like the perfect brownie recipe to keep passing on down the foodblogging chain, and boy, is it amazing! Fresh out of the oven, these brownies are warm and delicious, creamy and just a bit melty on top, with the amazing combination of chocolate and cream cheese. One of my law school friends came over and raved about the taste, and I've got a great big pan of them to refrigerate for later.

I paired the brownies up with a martini of my own creation. It's not very complicated, but I've always loved chocolate cherries. A chocolate covered cherry was a special treat whenever mom went into the gas station to pay for her gas—it only cost a quarter, and I loved sucking on the top until the chocolate collapsed and then drinking the liquid centre before biting into the cherry. It's been a long time since I sampled this old favourite, but the adult version makes an excellent cocktail, and I was able to use the leftover baking chocolate from my brownies as a garnish. Plus, I've been looking for an excuse to use these crazy martini glasses ever since I bought them at Target!

I pretty much followed the recipe as given by Tartlette, but I changed the order a wee bit to suit my needs and didn't bother with the foil in the pan. I found it relatively easy, and with a little advanced planning there aren't too many dishes to wash. 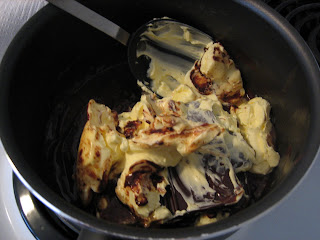 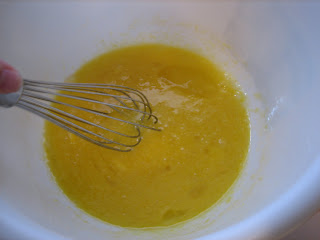 Start by melting 300 g chocolate with 200 g butter over low heat. I used Ghiradelli 60% cocoa bittersweet chocolate. I wouldn't recommend anything sweeter, as the recipe is plenty sweet as is. While that's melting, lightly beat 6 eggs, 200 g sugar, and a teaspoon vanilla until pale. Personally, I did the beating by hand and it wasn't that pale, but it didn't make a bit of difference. Let the chocolate cool slightly before stirring into the egg mixture, then add 150 g of flour and a pinch of salt, stirring in little by little to fully incorporate. Pour this batter into a greased 13 x 9 pan (I used a slightly larger Pyrex). Now, mix together 250 g ricotta, 150 g cream cheese at room temperature, ¼ cup sugar, 1 t vanilla, 2 eggs, 120 g sour cream, and 2 T flour. I forgot to warm my cream cheese before hand, so I did everything else first and mashed it up a bit with a fork before adding. The batter was a bit lumpy, but it didn't make much difference. Lumps of cream cheese, for me at least, are not a big problem. Incidentally, I also used the "healthy" versions for nearly everything in this recipe—Country Crock instead of real butter, part skim ricotta, fat free Philadelphia cream cheese, and fat free sour cream. It still tasted delightfully rich. I had a bit of trepidation about making brownies with eight eggs, but I guess it all balances out. 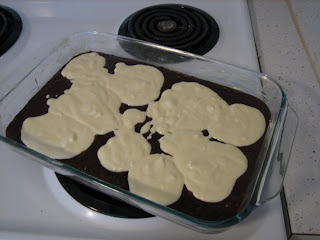 The final step is to spoon the white batter over the brownie batter in the pan and swirl the two together with the tip of a knife (or a toothpick). The recipe says to "dot" the cream cheese mixture, but mine came out more than enough for the area of the pan, so most of the brownie batter was covered with white. It still turned out lovely. 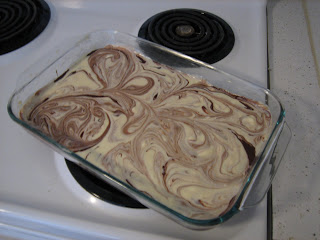 Bake at 350 for 20-25 minutes. I went with 25 to be safe. The top was still fairly gooey when it came out, but after cooling on a wire rack for about half an hour the bottom was plenty firm to cut with the top still nice and melted (more in the middle than around the sides). This makes a really large pan of brownies, so I threw it in the fridge once it had cooled completely, and it's still delicious and creamy on the top, more brownie-like on the bottom.

Before making this martini, put a bottle of Smirinoff black cherry vodka, your martini shaker, and a couple trays of ice in the freezer. I kept my chocolate liqueur at room temperature and it was fine, but you could also refrigerate that. 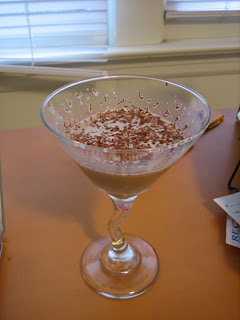 Pour two regular shot glasses of chocolate liqueur, one and a half regular shot glasses of the cherry vodka, and about ¾ a shaker of ice cubes in your cocktail shaker. Shake well, then strain into a glass. I grated a leftover square of my Ghiradelli bittersweet chocolate from the above brownie recipe on top, and if you're ambitious you can also press chocolate or cocoa powder around the rim and garnish with a cherry. I thought this martini had an ideal balance of strength and sweetness, and though it was rather simple and a bit thin (maybe next time I'd add just a touch of cream), it was quite a delicious accompaniment to my brownies. I was even in such a good mood that I didn't mind a bit spilling on the floor in the process of my very first martini shaking.
Posted by Avory at 12:58 PM

I'm happy you like the cheesecake brownie!
I really have to do it again (and again!)

They're amazing!! Thank you so much for the recipe - à charge de revanche!

That looks very elegant in the glass.