Gosh, Judith, you're so corny! 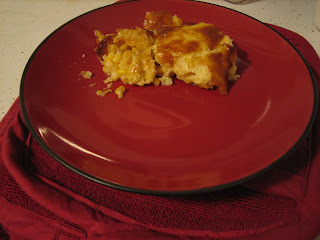 When I found this month's prompt for Sugar High Friday, I just knew I had to try it. I've been wanting to do a foodblog challenge or community event since I created this blog earlier in the summer, and the "local dessert" theme seemed easy enough. I thought about trying to recreate the ice cream bar I had at the state fair last week, but for me, the first thing I think of when I think of Iowa is always "corn." Furthermore, one of my favourite desserts from childhood was corn pudding. Growing up in Raleigh, North Carolina, my mother didn't make corn pudding, but some people's mothers certainly did, and this occasional treat sits at the back of my memory like so many long-lost tastes and smells, just begging to be drudged up again in the name of nostalgia. As it turns out, Iowans are also fond of corn pudding, so I decided to give it a go to combine my hometown and my new home in a local dessert challenge.

My original plan was to make a corn pudding using fresh Iowa corn, but when I went through the corn bin at Hy-Vee Monday, I was more than a little worried by the number of bugs and snails happily coexisting with the cobs. I realise that creepy crawlies are a fact of life when it comes to fresh corn, but in that regard I am very much a city girl, and so I stuck very much to the recipe I found on allrecipes.com, using canned corn instead of fresh. If you're braver, I would suggest substituting the can of whole kernel corn for a few ears fresh sweet corn, as it would bring out the flavour of the corn even more. Also, though the pudding is good hot, it's amazing the next day eaten right out of the refrigerator. This gives the pudding a chance to set, so it's less watery, tastes less "eggy," and the sugar really soaks in to bring out the flavour of the corn. 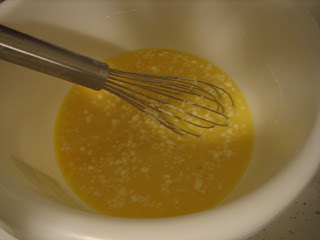 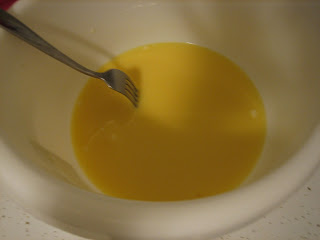 This recipe is delightfully easy, and it doesn't require too many ingredients, so it's pretty cheap, too. Start by lightly beating five eggs. I used four jumbo hen's eggs and one large, as that was what I had on hand. Then whisk in 1/3 cup melted butter (I know most people probably go traditional and melt butter on the stovetop, but I can't get away from my one minute in the microwave in a coffee cup method). Next, whisk in ¼ cup sugar, then ½ cup milk (I use skim, and also my butter is actually Country Crock spread, so it's a bit healthier). Whisk in 4 T cornstarch one at a time. As you can see, my cornstarch stayed rather lumpy when I used a balloon whisk, so I switched to a fork and sort of scraped against the sides of the bowl until most of the lumps were gone, which worked like a dream. Once you pour it into the pan, you can get any remaining lumps that float to the top out with your finger or a spoon. 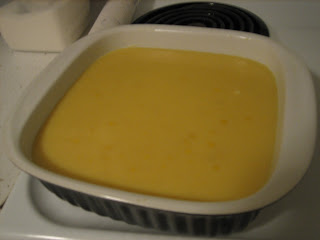 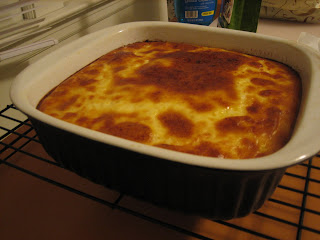 Next, stir in two cans of cream-style corn and one can whole kernel corn. My cans were all fifteen or 15.25-ounce, though the recipe uses slightly different amounts. I don't think it really matters. Once your corn is incorporated, pour into a greased two-quart casserole dish. Mine is 2.5 quarts and it came pretty near to the top, but maybe we can blame that on the jumbo eggs. Now the best part. Bake for an hour at 400, and just walk away. In fact, I wouldn't recommend checking it even if you want to, because it does brown up pretty thoroughly, and while in the oven it might look browner than it is. After an hour, it should be a lovely golden colour with large medium-brown patches. I let it cool pretty thoroughly on a wire rack before tasting, and then threw it in the fridge overnight.

Thanks to The Passionate Cook for hosting this month's SHF. I can't wait to see what everyone's come up with!
Posted by Avory at 6:34 PM

This looks excellent. I can't tell you how many years I've been wanting to make corn pudding. What's held me back? This fall, for sure. And I will add some "live" corn kernels,since I think they'll add a nice toothsomeness to it.

I do think they would enhance the flavour; I'm just a wimp when it comes to fresh corn! Good luck and thanks for stopping by :-D

That looks good. The funny thing is although you were a city girl, your mother grew corn in her back yard garden. She just never made you pull out the creepy crawlies or cut off the bad parts. Who know which way would have been better. Cheers from you know who, ha.

That corn pudding, it's following me *g*. I really don't have an excuse not to try it, do I.

corn pudding? never even heard of it. does to show how much i've missed out on growing up in the deep dark forests of austria. sounds wonderful. thanks for contributing to SHF34!

Tag! You're it! Please visit my blog for details.

fff - It's easy enough to give it a whirl, for sure!

thepassionatecook- Ah, but there are so many other wonderful things in those deep dark forests. You have Semmeln! Haha. I guess we all envy what we don't have ;-)